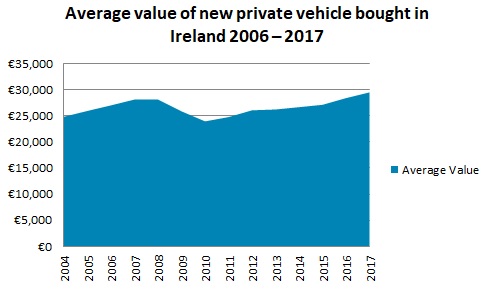 Vehicle history and data expert CARTELL.IE report today (July 25th) that the buyer of a new private vehicle in Ireland is now purchasing a vehicle worth more than €30,000 on average for the first time since Cartell.ie started recording these statistics.

Why has the average value been increasing?

Cartell.ie considered several possible reasons for the increase in the average value of a private vehicle purchased in Ireland over the last several years:

The buyer of a new vehicle is getting more features than ever before, more technology, more safety, for example. The buyer has also shown an appetite for other features which manufacturers are increasingly rolling out as standard such as alloy wheels and electric windows. Combined, these features increase manufacturing costs and push average values upwards. The buyer may also be opting for more expensive cars owing to more readily available lines of credit or simply because buyers are keen to buy a larger car when fuel economy and motor taxation figures have dropped so significantly across the board.

Buyers have different buying habits: some will enter the market with an open mind and opt for the best available deal within their budget; while others will be keen to opt for the same manufacturer or the same model.

Remember this study is considering average values of new private vehicles based on the Open Market Selling Price: we are not looking at the price actually paid by the buyer: the actual deals struck between the buyer and the seller will vary widely to account for discounts, sales events, and trade-in values for example.”