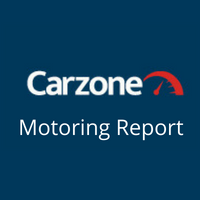 In July, our friends over at Carzone.ie produced their Motoring Report which examined trends in the Irish motoring market. They kindly credited ourselves, Cartell.ie, for providing some of the data used throughout. Check out a synopsis of the report below or download the full report in PDF format on Carzone.

Irish motorists have seen an increase in their car running costs in the last year according to the latest Motoring Report from car buying experts Carzone.

The bi-annual report which examines trends in the Irish motoring market finds that 61% of motorists say their running costs have increased in the last 12 months with 29% stating they spend upwards of €250 per month on keeping their vehicle on the road. 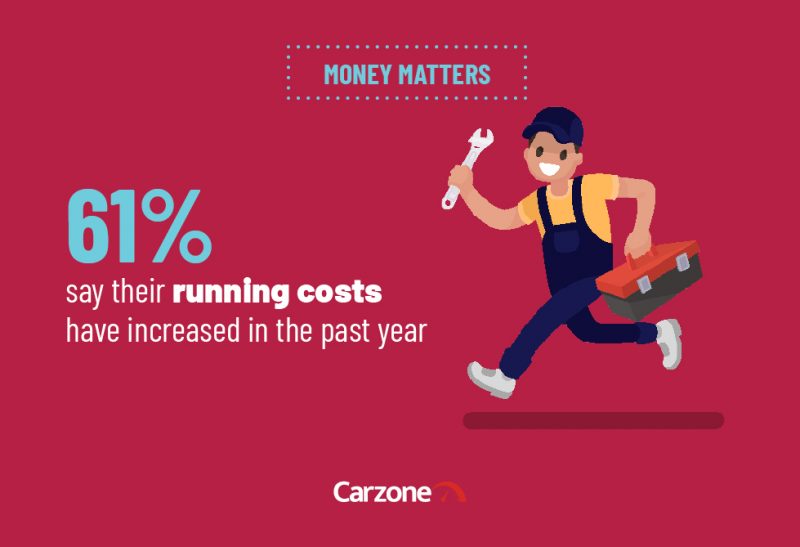 The Carzone Motoring Report is compiled by analysing data from the 77 million+ searches carried out on Carzone from January to June of this year, as well as an in-depth survey of 1,600 Irish motorists.

Insurance remains the top financial concern for 61% of Irish car owners. Almost 1 in 5 (19%) cite the cost of fuel as a worry while 9% say general maintenance of their car is a financial concern. 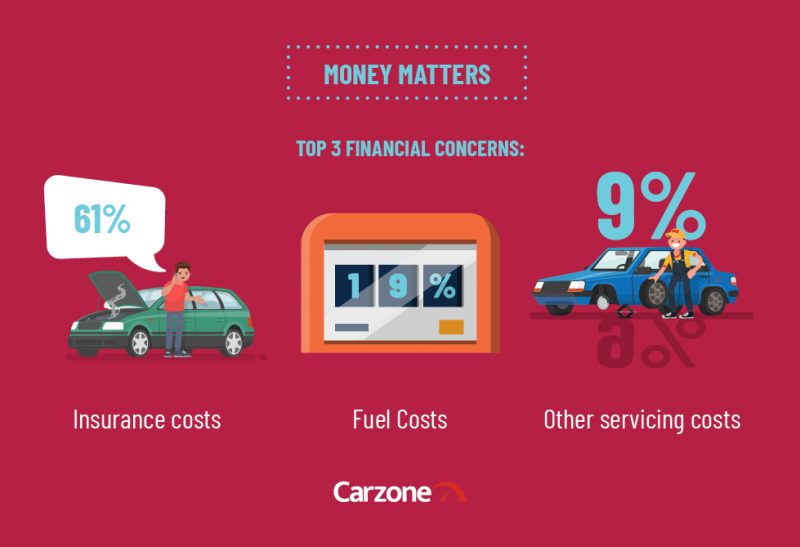 Although insurance comes out as the top concern, almost a third (32%) say their insurance premium has either decreased or remained the same in the last 12 months. 64% also say they have not switched insurance company in the last year opting to stay with their current provider.

The latest Motoring Report finds that motorists are now more open to switching to electric and hybrid cars. Almost two thirds claim they plan to purchase an electric or hybrid car in the near future with the Tesla Model S and the Nissan Leaf being the most searched electric cars on Carzone site over the past six months. Awareness levels on the difference between electric and hybrid cars is high (84%) and 6 in 10 know where their nearest charging station is. 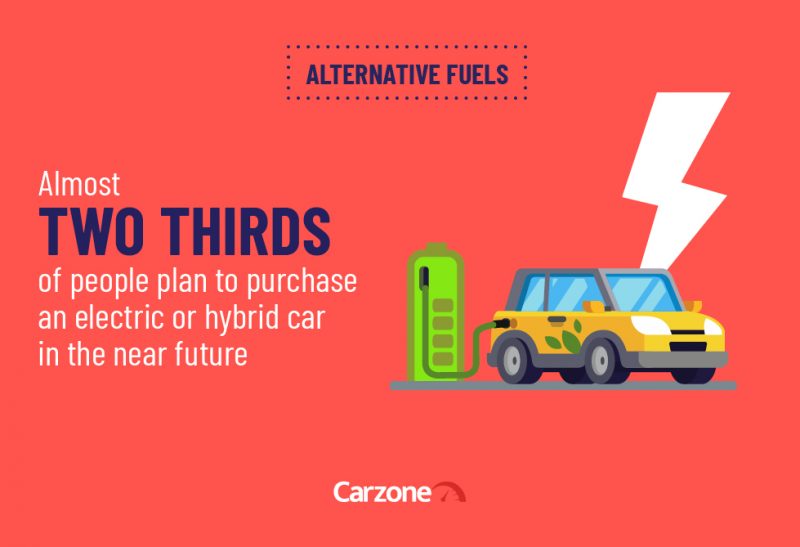 Given that many motorists are reporting a rise in running costs, it’s no surprise that 45% of those questioned say cheaper running costs is their number one incentive for making the switch from petrol or diesel.  Being kinder to the environment was the second most popular reason (40%).

What’s on your plate?

Although 69% of those polled would travel for more than two hours to purchase a car, it seems that where that car is from is important. Indicating that county pride is alive and well among Irish motorists, over a third (39%) say that they prefer to buy a car with a registration plate with the county they are from. In fact, so important is the registration plate to motorists that 46% claim that registration plates from different counties impact the value of the car! Interestingly those who lived in urban areas were more conscious of the county on their number plate (48%) compared to 42% of those living in the country.

The taxi of Mum & Dad

New to the report this year is a section on families and cars. Starting a family is often a key catalyst for changing a car. When asked what the most important factors are for parents choosing a car, cost and safety were the key decision factors (38% and 31%). 1 in 5 say that the size of the car impacts their choice.  When it comes to purchasing a family car, it’s a joint decision for over half of those questioned (58%). 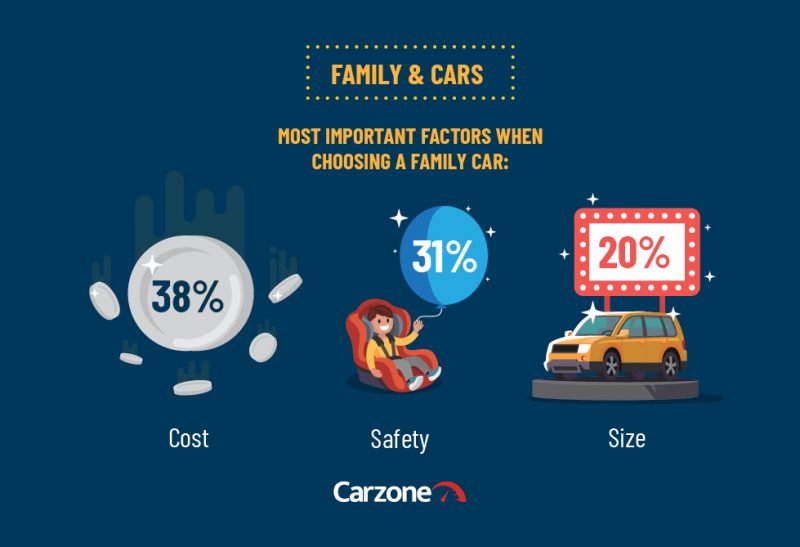 The Carzone Motoring Report also finds that parents spend a lot of time in their car with 52% stating they spend more than two hours a day driving their family around.

The report reveals that over two thirds (68%) of respondents who sat their driving test over 10 years ago passed it first time around, while 58% of drivers who took the test within the past 5 years needed two or more attempts to succeed. The research also finds that 57% of those who have a provisional licence have renewed it more than three times. When it comes to elderly road users, the report finds that over half (55%) of those polled think there should be a mandatory retest for everyone over 70.

According to the Carzone Motoring Report, 38% intend to buy a car in the next year. Of those that are planning a purchase, 46% will buy a car under two years old. The key reasons for buying a new car are that they simply wanted a newer or more reliable car or they needed a larger car to accommodate their growing family. 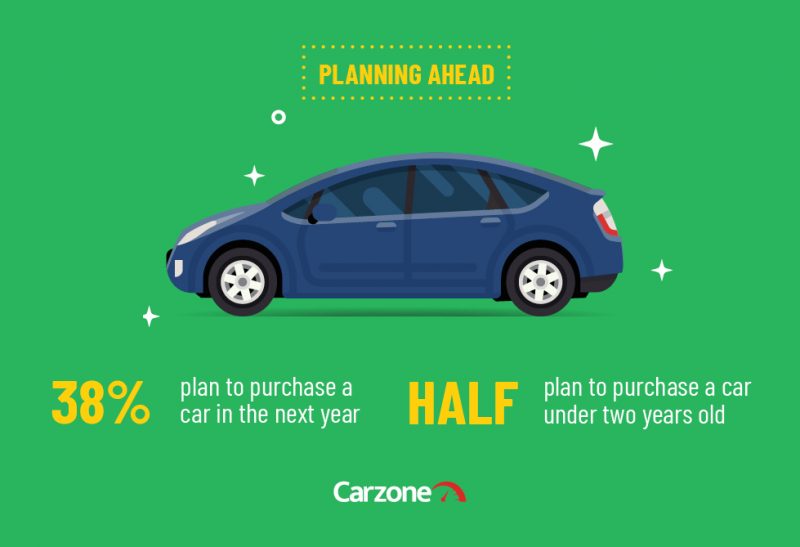 Over half (55%) have considered buying a car from the UK and 59% would consider purchasing in the UK in the future because of the price. However, 46% say that the biggest deterrent to car shopping in the UK is that it’s too much hassle.

While most cars are still purchased in dealerships or private sale, motorists have become more open to buying a car outright online. Over three quarters (77%) say they would pay up to a €1,000 deposit online for a car while 13% would be open to paying for a car in full online. 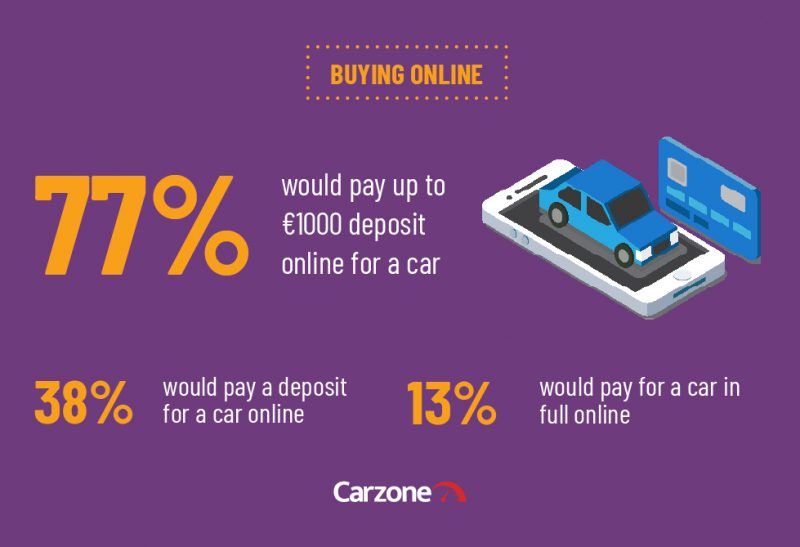 The main reasons for not buying a car online include the risk involved and the desire to see and test drive the car before making a purchase.

“Our latest Carzone Motoring Report is our tenth edition which looks at all aspects of Irish motoring. To mark our latest edition, we have added in some new topics such as family and cars, number plate snobbery and attitudes to buying cars online.

Insurance premiums which have been a top concern for a number of years are still the key issue impacting motorists despite the fact that many of those questioned have seen their premiums decrease or remain the same.

We are also seeing a shift in attitude towards electric and hybrid cars over the last few years as motorists get to grips with alternative fuels and the benefits they bring. Our latest report shows that 84% now know what electric and hybrid vehicles are and almost two thirds are planning to make the switch in the near future.”

While you’re here why not check out Cartell’s new Personal Account: