With entries still open for the Cartell.ie International Rally of the Lakes over the May Bank Holiday weekend, over 90 crews have entered and the stage is already set for battle royal in all classes and categories of the  35th Rally of the Lakes.

Heading the international Entry list is last year’s winner, Gary Jennings who is likely to start the event in the top slot. Behind him comes the current leader of both the Tarmac and the National Championships, Declan Boyle, with two times Lakes winner Daragh O’Riordan and former winner Denis Cronin also in contention for a repeat of their earlier successes.

West Cork Rally winner Donagh Kelly will be seeking his first Killarney win, while the 2012 Billy Coleman award winner, Sam Moffett, in his Fiesta WRC, will be anxious to make his mark on the International Rally scene. Local Driver Alan Ring has reverted to his Group N Subaru for this season but he faces stiff opposition from drivers such as Josh Moffett (Evo) and former National Group N Champion Colm Murphy. 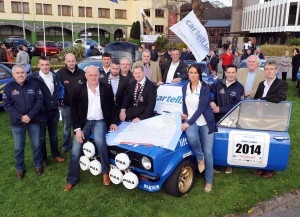 Making a welcome return to the rally scene is Aaron McHale,who will be seeking to continue in the winning ways which made his father, Austin, a multiple Tarmac Rally Champion. In the National Rally all the big Escort brigade come out to play but perhaps the person who will cause them most bother is the flying milkman from Donegal, Declan Gallagher, who put in such an incredible drive over many of these same stages to take the overall win in the Modified section of the 2013 Rentokill Killarney Historic Rally last December, on his first ever event in Killarney. Declan went on to repeat the category win in the West Cork Rally and will be anxious to consolidate his claim to the top spot in the Modified Challenge of the Clonakilty Black Pudding Tarmac Championship.

Others well in contention in the National section include local crews Barry Meade who has returned to rallying after a year of competitive cycling, Fergus O’Meara who won the National Section last and Billy Coleman award finalist Rob Duggan in his incredibly quick Honda Civic.

Last year’s FIA Historic Rally of the Lakes winner Wesley Patterson has abandoned his Appendix  K Car to revert to his more familiar Modified machine and will also be a strong contender, as will the legendary Phil Collins who makes the trip from Herefordshire to the stages he loves so well and where he has enjoyed considerable success over the past 32 years.

Killarney’s Ed Murphy comes to the event on the back of two great drives in the Dunlop National series, which have netted him a 5th overall in Birr and 9th overall in the recent Circuit of Kerry, while Roy White , who appears to have sorted the reliability problems in his Rover MG, loves the Killarney stages and has shown that he has the speed to mix it with the best that the opposition can throw at him.

The battle for the John Mullane Cup for the highest placed driver from Co Kerry will be as closely contested as it has been since the award was first introduced in the very early days of the Rally of the Lakes.

Apart from the Kerry crews already mentioned one can never rule out the father and son combination of Charlie and Johnny Hickey whose experience of these stages is vast, as indeed is that of John Hickey, Kevin O’Donoghue and Vincent O’Shea.

Mark’s opposition will be provided by crews from the UK, Isle of Man, Italy, Sweden, Finland and Spain in Appendix K cars which include Ford, Lancia, Triumph, Porsche, Vauxhall and BMW.

A strong Junior Entry has already been received and these will join the rally for all of the second leg of the rally on Sunday. The event gets under way with a ceremonial in Killarney town centre on Friday evening with competitive motoring kicking off on Saturday morning to tackle a loop of three stages at Molls Gap, Beallaghbeama and Caragh Lake before returning to Service at the Liebherr  Container Cranes factory in Fossa.

A second loop of these three classic stages follows, with a further visit to Service before tackling the final stage at Kilcummin, which is a shortened version of the stage which featured as the finale of the Killarney Historic Rally for the past two years.

The first day’s stages will be familiar to most Rally of the Lakes regulars but there are some variations such as a hairpin right at the end of Molls Gap and Beallaghbeama reverting to the longer version which was a feature of the earlier years of the Rally of the Lakes.

Sunday sees the cars tackle Molls Gap for the third time and then it’s on to a loop of three stages which have not been used for ten years in the Rally of the Lakes. The first of these, Borlin, is actually a combination of two old classics, Sheen River and Borlin,  and takes the rally over the county bounds into County Cork. The second is the fabulous lakeside stage at Lough Allua, which was a regular feature of the Circuit of Ireland up to the eighties and of the Rally of the Lakes from 84 until 2004.

In recent years the stage has been associated with the Cork 20 International but the Cork 20 version generally runs in the opposite direction to the Lakes format, starting in Ballingeary and finishing in Kilmichael.

Fuhiry, which starts outside Ballingeary, brings the rally back over the County Bounds , past Creedons at the Top of Coom, the highest pub in Ireland, and finishes on a fast downhill section towards Kilgarvan.

Service in Kenmare Mart is followed by a further trip over the same loop of three and, after a final service in Kenmare, the rally concludes a run over Moll’s Gap back to Killarney.