Cartell.ie recently took possession of a Seat Leon ST FR 2.0 TDI 150bhp DSG courtesy of Seat Ireland. It is the estate version of the Seat Leon and the FR is the sport version. We don’t do a lot of car testing internally but the advent of another mouth to feed on the home front combined with the age of my current car (2007 2.0 TDI VW Passat Highline) means that change is coming. 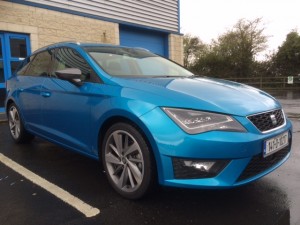 The Seat Leon FR is fast (0-100km/h in 8.6s) and the 6 speed DSG box with sport mode was just excellent.  It averages 4.5l/100km and is only €200 per year to tax. It is easy to forget that you are driving an estate. The interior trim reiterates the sporty nature of the vehicle with red stitching on the seats, gear knob and steering wheel. Another nice touch was the red light in the door panels which illuminates at night. The driving position is excellent with good road visibility and the sports seats were supportive in corners. The handling was positive especially with the drivers assistance pack which contains lane assist (option @ €334 but well worth it). The 18” alloys assisted with the handling as did the sport suspension and the ride was not too firm

In terms of the practicality, it was quite spacious up front. I also put three child booster seats across the back. It was tough to put the seat belts on, but it could be done just like the Passat. It won’t take 3 full child seats but very few cars will (you need to look at the Alhambra for that). I was also able to deactivate the front air bag for the maxi-cosi  (people with babies know what this is – infant child seat for those who don’t) with ease, although I handed the car back to Seat without turning it on again. However it is a doddle to do so I expect the next user to do it with ease. The boot is 587 litres and not far behind the Passat.  The boot can be split high and low to allow for ease of loading. Rear legroom was a bit tighter than what we would be used to but again it is more than sufficient. 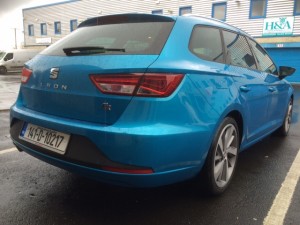 The Leon ST FR looks good. The colour for our test might be a tad strong but it certainly would get you noticed. I would go so far as to say that the ST looks better than the Sports Coupe (Hatchback) Leon. The LED lights were very bright and clear.

This was the safest car that I have driven to date. Not because of the 7 air bags, hill-hold, tyre pressure warning light, ECS or the LED lights which are all standard.  The clincher for me was the Adaptive Cruise Control and Lane Departure.  Although an extra it meant the vehicle could practically drive itself along the M50 and more importantly help you if you did dose off. People need to test this for themselves. It’s eerie at the start but you get used to it fast. However technology is such that autonomous vehicles are just around the corner and Google’s driverless car is the classic example.

So far we can see that I like the car, but what really pushes me in the direction of the Seat is what you get for the price. The FR comes in two engines. We tested the 150bhp but it is available in the 184bhp version for less money although it won’t have DSG. It will however be faster and just as efficient. The list of standard features include, Hill Assist, Cruise Control, Bluetooth, 7 Air Bags, iPod connection, parking sensors, Sport Mode- the list is quite extensive without the need for options. I would go for the 18” alloys and metallic paint as a minimum. 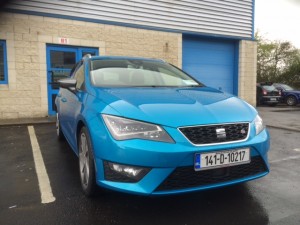 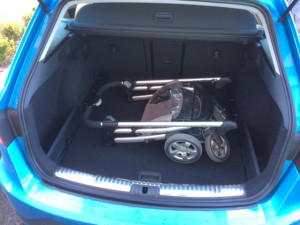