Home / News & Press / So is Scrappage really driving the Market?

In 2009 the Government of the day announced the introduction of a scheme – the scrappage scheme – which provided a significant financial incentive for owners of 10-year-old vehicles to buy a new car. Originally the scheme was worth €1,500 to a buyer of a new vehicle but that figure was reduced to €1,250 for the period January 1, 2011 to June 30, 2011. The scheme is set to end in June 2011.  While the scheme has been commended for its positive impact on the car industry in Ireland – and while undoubtedly it has impacted positively on trade – we don’t think it’s the only Government initiative which is driving sales.

Another Government incentive, introduced earlier, appears to have an equally large impact on sales – the change in the Motor Tax regime in 2008. In that year, in July, the Minister for the Environment, John Gormley, changed the criteria from engine size to CO2 emissions. This move immediately benefited Diesel engines which emitted lower CO2 emissions. Manufacturers also began to reduce those emissions, both for petrol and diesel vehicles, and had particular success for Diesels – even larger saloon diesels began to qualify for the lowest category of road tax.

In today’s market there is consequently a significant difference in the value of an old-regime and new-regime vehicle: anything registered in the first half of 2008 can differ markedly from the equivalent vehicle registered in the second half of that year – the best proof of the impact of the new taxation regime. On examining our partner website Carzone we  found differences of up to €4,000 between the asking prices for identical vehicles – with similar mileage and condition – in 2008 – entirely down to the tax regime.

We spoke to Marcus in John Hayes Cars and he said:

“How can anyone stand over the new motor tax regime! It massively affects market value of vehicles – artificially. One consequence is that the value of petrol vehicles is too close to diesel equivalents for certain years. Although one upshot is the tremendous value a buyer can get if they’re in the market for an 07 vehicle.”

He goes on to comment: “If I had to name vehicles that we would buy in bulk for re-sale they’d all be diesel vehicles: the likes of the Citroen C4 Picasso, the BMW 318D, 320D and 520D, Ford Focus 1.8TDCi and Audi A4 – these vehicles will each sell in days – they’re moving off the market very quickly now”.

Of course you might ask how the tax regime is pushing the sale of new vehicles in 2011? Well considering that many owners of new vehicles change their car after three years – and considering the high residual value on second-half 2008 vehicles and 2009 vehicles – there are quite a lot of individuals in the market to buy a new car in 2011 – a fact backed up anecdotally by trade sources.

There is another factor too. The car market is a complicated market and there are different segments. Some buyers, currently driving a ten-year-old vehicle show they are accustomed to driving older vehicles. Traditionally speaking these drivers might be expected to buy a new used car as opposed to a brand new car. However the scrappage scheme is drawing these buyers into new car showrooms. This may well be having an indirect impact on residual values for 07 and 06 vehicles – the traditional buy for ten-year-old car drivers. 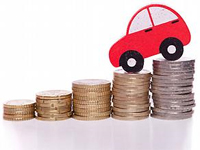 At the other end of the market drivers currently driving almost-new cars may often be inclined to change their vehicle every two or three years. These buyers, with entirely different buying habits, are more likely to be drawn back into the market by the high residual value on their current vehicle. In other words they may be more inclined to trade upwards and buy a new car because their current car is worth more than they anticipated.

This suggests that while the scrappage scheme may well be impacting on new car sales (see our latest TRADE FOCUS for the views of one dealer) it isn’t the only impacting factor – the introduction of the new motor tax regime in July 2008 and the consequent impact that move had on residual vehicle values – may also be playing a large part.