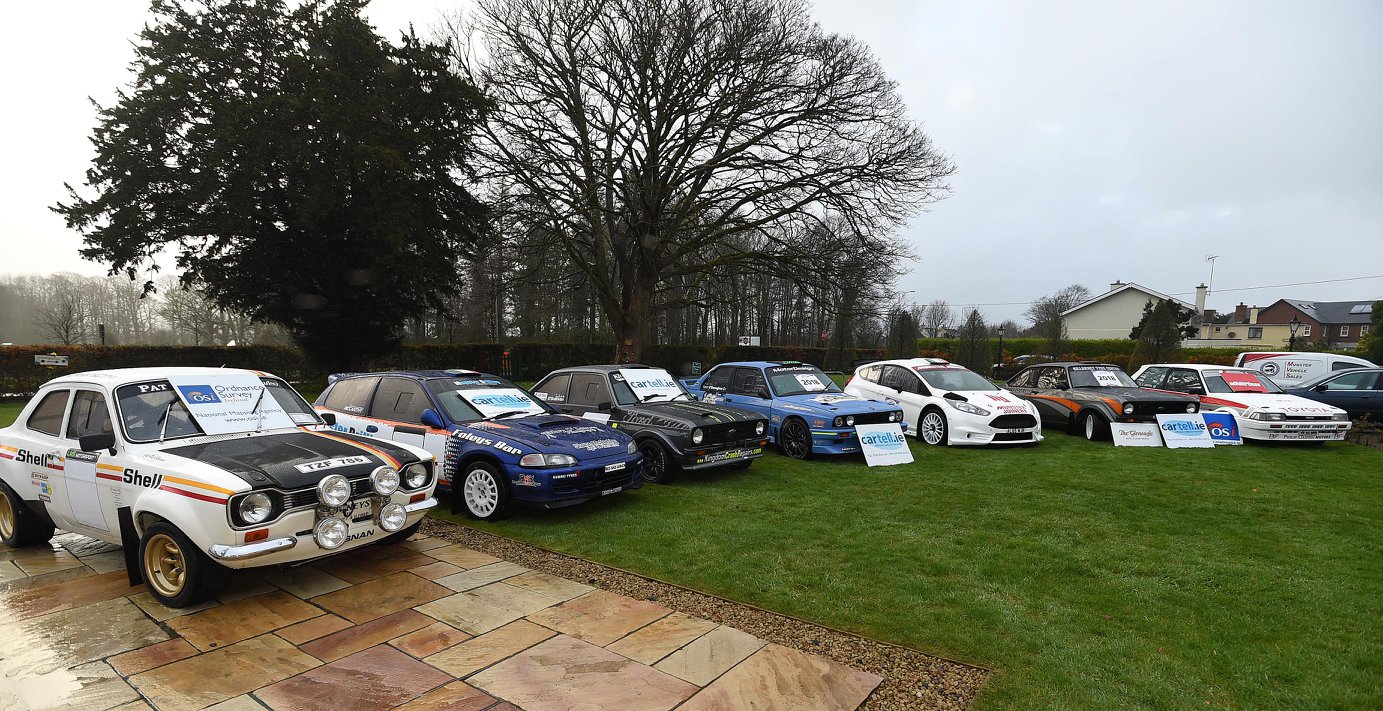 Killarney and District Motor Club held the official launch to the Cartell.ie International Rally of the Lakes 2018 on Sunday 15th at Brehon Hotel Killarney. There were some beautiful rally cars on display and a large crowd in attendance. Officials, Organisers, Sponsors, distinguished guest speakers such as TD Brothers Michael & Danny Healy Rae, Councillor Michael Gleason, WRC Co Driver Paul Nagle and Dignitaries of Killarney town were on hand to support the event. MC on the night was non-other than Mike Marshall event COC of 25years, he introduced Paul O’Neill of Killarney’s Chamber of Tourism and Commerce who spoke of how important the rally of the Lakes is to Killarney Town, bringing a welcomed boost to the local economy. Niall Kelleher Mayor of Killarney also spoke on the commitment and dedication of the voluntary club members involved and their ability to host an event of this magnitude every year. Other guest speakers included John Byrne of Cartell.ie, Brian McArdle of Ordnance Survey Ireland, Kieran Healy of KC Print/Killarney Advertiser and Patrick O’Donoghue of the Gleneagle Hotel Group who have been involved since the rally’s first inception in 1979.

Killarney & District Motor Club, organisers of the Cartell.ie Rally of the Lakes have announced details of this year’s event which will take place over the May Bank Holiday weekend 4th – 6th May. 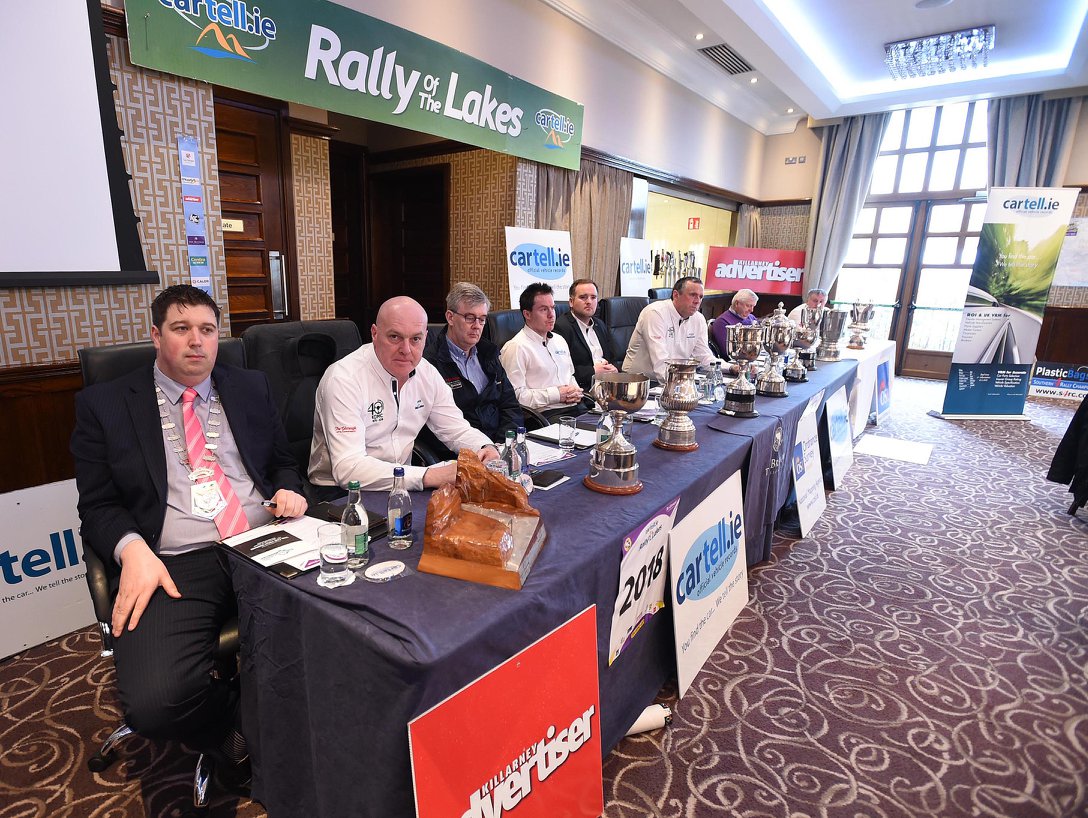 Killarney Businessman Dermot Healy has taken on the role of COC for his sixth year. Dermot, who is very much respected in the town of Killarney for his incredible voluntary and charity work, has put together a strong organising committee and operations are well under way. Dermot explains: the route stages are the most famous classic route of stages available and these demanding, technical and challenging stages should test each competitor to their full ability. While also maintaining the unique classic stages that the Rally of the Lakes holds worldwide, our main aim is to bring the Rally back in and around the Killarney town area and we have achieved this with our Sunday loop of stages.

Once again for their ninth consecutive year Ireland’s leading vehicle history record company Cartell.ie return’s as the main title sponsor of the Rally of the Lakes 2018. Including additional support from Killarney Advertiser, Ordnance Survey Ireland and the Gleneagle Hotel Group, who have been supporters of the Rally of the Lakes for many years and continue as Associate Sponsors.

The three-day event will begin with a ceremonial start in Killarney’s town centre at 7pm on Friday 4th May. Plans are at an advanced stage to create a motorsport festival on the streets of Ireland’s most famous town.

The real action will commence early on Saturday morning with the iconic Molls Gap, followed by the Tim Healy Pass and centralised service in Castletownbere Pier. Then it’s time to head out on the famous stages of Cods Head and Ardgroom with a repeat run over the Healy Pass and into service for a well deserved break. Cods Head and Ardgroom are repeated and a blast through the Kilmakilloge harbour stage to finish off the day.

Sunday Morning starts with Molls Gap once again, followed by the mountainous Beallaghbeama Pass, Then into service at Liebherr Container cranes Killarney. This Loop is of Molls Gap and Beallaghbeama Pass is repeated with the inclusion of a new version of the fast flowing Shanera stage called Brook Hill. It’s into service once again before heading out to the Spectator friendly loop of Rossanean, Brook Hill and Rossanean again as the final stage. The crews will arrive back to the finishing ramp at the Rally Head Quarters – The Gleneagle Hotel at 17.30 for Celebrations and Champagne. The strength of the Cartell.ie Rally of the Lakes 2018 is evident with entries only open a few hours, over 70 crews have entered and the stage is already set for battle royal in all classes and categories.

Heading the international Entry list is last year’s winner, Sam Moffett who is likely to start the event in the top slot. Local Co-driver Noel O’Sullivan takes up the hot seat alongside Sam for his first time and will be hopeful for his first overall win. Behind him comes a host of WRC machinery with two times Lakes winner Donagh Kelly, along with Roy White & Declan Boyle who have led this event in the past. Donegal man Manus Kelly has shown interest in this year’s event, he will be a great addition to the line up. Irish Tarmac Championship leader Josh Moffett arrives in Killarney on top form with recent back to back wins on both the West Cork and Easter stages Rallies. Other Top R5 competitors include Robert Barrable who was second overall last year, 5 times Irish Tarmac Champion Eugene Donnelly in his Hyundai I20 R5, Stephen Wright & Jonny Greer both in their Ford Fiesta’s along with Desi Henry in his new Skoda Fabia R5. Top Local crew Daniel Cronin/ Shane Buckley have had a great start to their Irish Tarmac Championship campaign, recently acquired the ultimate Ford Fiesta from M-Sport, he will be anxious to make his mark on the home event. While also including Killarney regulars Joe Connolly, Keith Lyons amongst the R5 cars.

In the National Rally all the big Escort brigade come out to play but perhaps the person who will cause them most bother is from Donegal, as last year’s Modified winner Kevin Eves returns in his Toyota Corolla 2.5, he has put in such an incredible drive & category win on both the West Cork Rally & Easter Stages rallies to lead the championship heading for Killarney. Local man Rob Duggan is fresh from a win in the Killarney Historic Rally in December, he has hired an ultimate 2.5 Escort and will be hard to beat over the classic stages. Barry Meade is a previous Modified winner and will be incredibly quick also. Past winner Wesley Patterson will also be a strong contender, as will the legendary Phil Collins who makes the trip from Herefordshire to the stages he loves so well and where he has enjoyed considerable success over the past 32 years. Other top entries include: Vincent McSweeney, Jack Newman, Gary Kiernan, Liam Howlett, John O’Donnell, Enda O’Brien, Eugene Megan.

The battle for the John Mullane Cup for the highest placed driver from Co Kerry will be as closely contested as it has been since the award was first introduced in the very early days of the Rally of the Lakes. Top crews include: Charlie Hickey, Kevin O’Donoghue, Denis Hickey, Tadgh O’Sullivan, Fergus O’Meara, John Hickey, Ed Murphy, Con Lucey, Noel O’Sullivan and Vincent O’Shea. A strong Historic & Junior Entry has already been received. The Historic’s will contest the whole event, while the juniors will contest the rally on Saturday.

The May bank holiday weekend is near and the Cartell.ie Rally of the Lakes is the place to be. 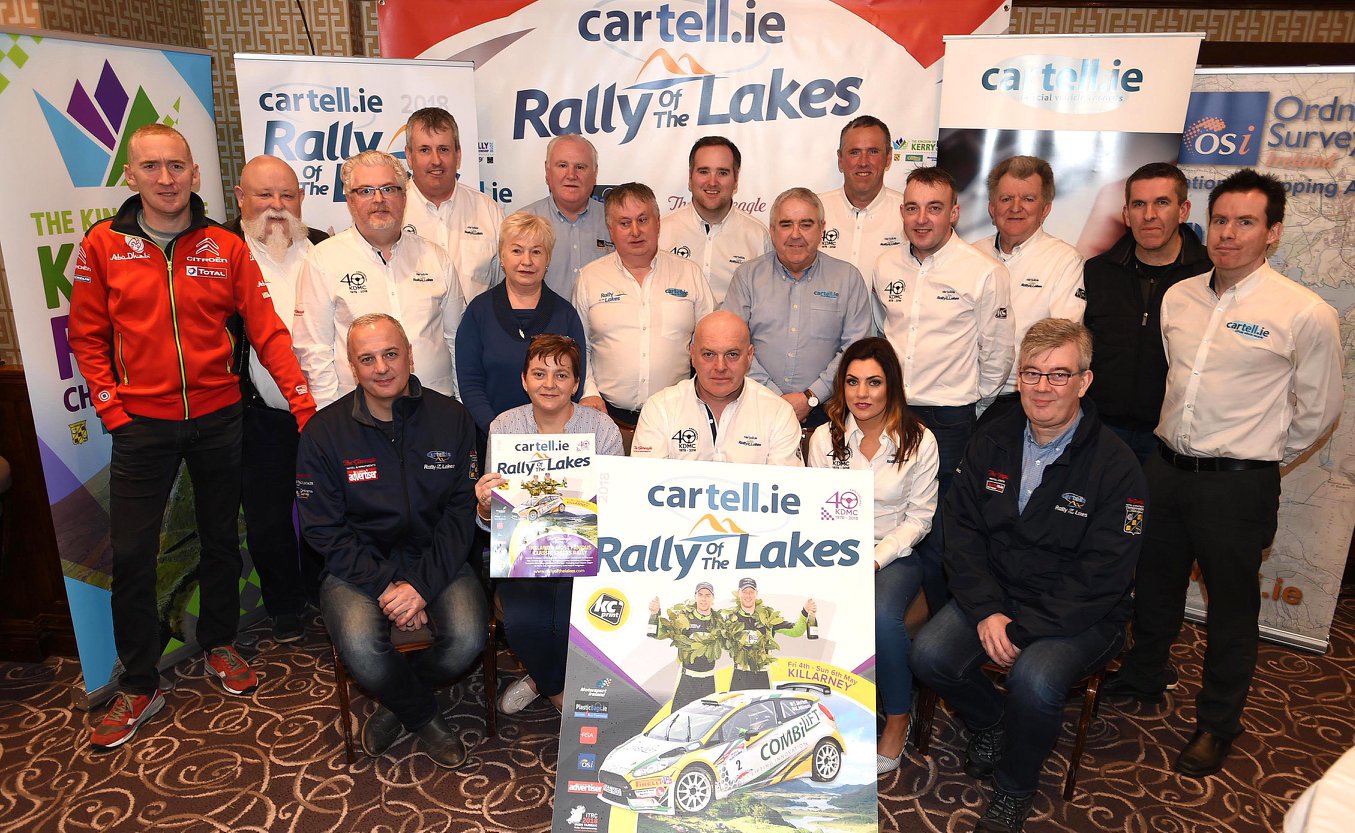 One thought on “PRESS RELEASE – Cartell.ie Rally of The Lakes”