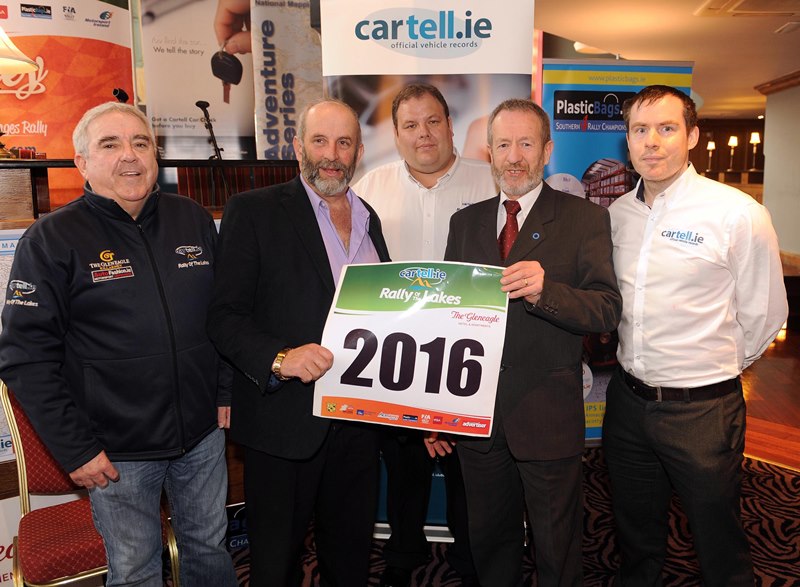 Killarney and District Motor Club held the official launch to the Cartell.ie International Rally of the Lakes on Easter bank holiday Monday at Scotts Hotel Killarney. There were some beautiful rally cars on display and a large crowd in attendance. Officials, Organisers, Sponsors, distinguished guest speakers such as TD Brothers Michael & Danny Healy Rae, MEP Sean Kelly, Rally Legend Russell Brooks, including WRC Driver Craig Breen & WRC Co Driver Paul Nagle and Dignitaries of Killarney town were on hand to support the event. MC on the night was non-other than Mike Marshall event COC of 25years, he introduced Ann O’Shea of Killarney’s Chamber of Tourism and Commerce who spoke of how important the rally of the Lakes is to Killarney Town, bringing an estimated 10million to the local economy.

Bobby O’Connell Mayor of Killarney also spoke on the commitment and dedication of the voluntary club members involved and their ability to host an event of this magnitude every year. Other guest speakers included John Byrne of Cartell.ie, Brian McArdle of Ordnance Survey Ireland and Derek Lee of the Gleneagle Hotel Group who have been involved since the rally’s first inception in 1979.

Killarney & District Motor Club, organisers of the Cartell.ie Rally of the Lakes announced details of this year’s event which will take place over the May Bank Holiday weekend 29th April – 1st May.

Once again for their seventh consecutive year Ireland’s leading vehicle history record company Cartell.ie return’s as the main title sponsor of the Rally of the Lakes 2016. Including additional support from Killarney Advertiser, Ordnance Survey Ireland and the Gleneagle Hotel Group, who all have been supporters of the Rally of the Lakes for many years and continue as Associate Sponsors.

The 37th Rally of the Lakes will be accounting rounds of the:

Killarney is synonymous with Rallying as it is to its lakes and mountains. The Rally of the Lakes is firmly established as one of Ireland’s premier Rally events. It is estimated to be worth over 10million to the local economy. Last year our Tv coverage reached out to over 38 countries in Europe with an Estimated 30 million Household subscribers, displaying the various stages and showcasing the wonderful scenery that Killarney has to offer through the global network of channels such as (TV3, UTV, RTE, Sky Sports, Motors TV). This exposure is fantastic and hugely increases our attraction as an International event for both competitors and spectators. 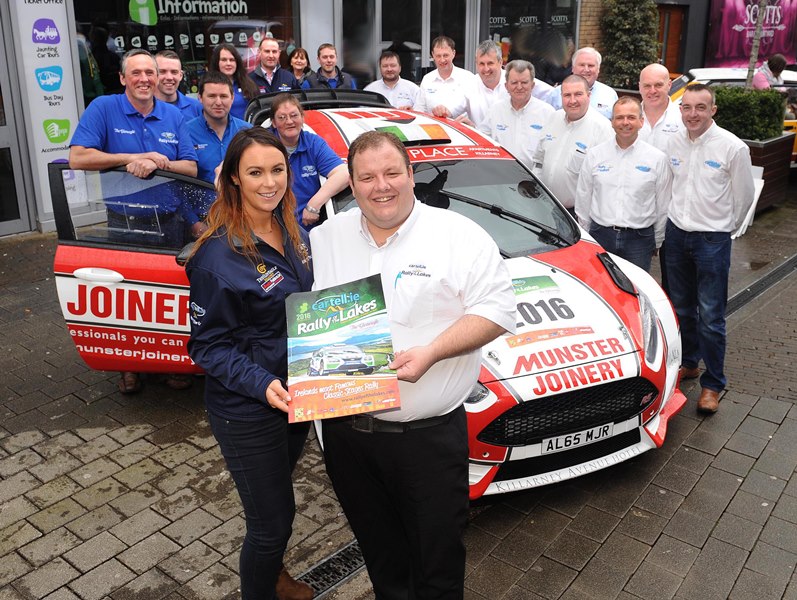 The newly appointed COC Anthony O’Connor and the organizing committee have taken a strong look at the current characteristics and changes of rallying in Ireland. Analyzing the market of other events and the main attractions for the competitor to compete. The Team have designed, structured and built the Rally of the Lakes 2016 completely around the modern day competitor, while also maintaining the uniqueness that the Rally of the Lakes holds worldwide.

Anthony explained plans are at an advanced stage to create a motorsport festival on the streets of Killarney town, the three-day festival event will begin with a ceremonial start in the town centre on Friday evening at 7pm April 29th. He said: “One of our main objectives this year was to bring the Rally back into the heart of Killarney and base the event completely in and around the radius of the town. We have achieved this by using a new stage format, a choice of new and old stages and the use of Liebherr Container Cranes as the centralised service area for the entire event. This makes the event attractive to both the competitors and the spectators to enjoy.

“Saturday morning kicks off with an old Circuit of Ireland favourite “Gortnagane” which runs parallel with the main Killarney to Millstreet road, then it’s across the road and into the fast technical Banard stage which is followed by centralised service at Liebherr Container Cranes Factory Killarney. This loop is repeated, then it’s time to head out for the evening loop towards Listry for a brand new stage called “Dromin” which should be a real sprint and challenge, followed by a crowd pleasing Blast through the “Rockfield” stage and into service once again. A repeat run over this loop finishes off the day.”

“Sunday morning starts with the iconic Molls Gap, followed by the mountainous Beallaghbeama Pass and the fast flowing Shanera stage, Then into service at Liebherr Container cranes Killarney. This Loop is of Molls Gap and Beallaghbeama Pass is repeated and into service again, before heading out to the spectator friendly loop of Carragh Lake, Shanera and Carragh Lake stages.”

The crews will arrive back to the finishing ramp at the Rally Head Quarters – The Gleneagle Hotel at 17.45 for Celebrations and Champagne.

The strength of the Cartell.ie Rally of the Lakes 2016 is evident with entries only open a few hours, over 60 crews have entered and the stage is already set for battle royal in all classes and categories.

Heading the international Entry list is last year’s winner, Donagh Kelly who is likely to start the event in the top slot. Behind him comes a host of WRC machinery with two times Lakes winner Daragh O’Riordan and former winners Derek McGarrity, Gary Jennings, Tim McNulty also in contention for a repeat of their earlier successes. Donegal man Declan Boyle who has led this event so many times in the past also returns to Killarney. Local Driver Alan Ring has been on the podium over the past 2years and has recently acquired the ultimate Ford Fiesta from M-Sport, he will be anxious to make his mark on the home event. While also Including Killarney regulars Roy White, Eoin Doyle amongst the world cars.

The positive changes to the Irish Tarmac Championship have for sure made a strong impact with the inception of the R5 Rally car. Championship Leaders and club members Keith Cronin/Mikie Galvin hope to contest the Lakes but will all depend on their Circuit of Ireland result and BRC championship commitments. The Moffett brothers Sam & Josh from Co.Monaghan are set to return to Killarney, along with Alaistair Fisher nephew of the great Bertie Fisher, Stephen Wright, Joseph McGonigle, Aaron McHale, Brendan Cumiskey, Joe Connolly and plus many more.

In the National Rally all the big Escort brigade come out to play but perhaps the person who will cause them most bother is from Donegal, Brian Brogan, who put in such an incredible drive & category win in the West Cork Rally leads the championship heading for Killarney. Local man Fergus O’Meara was second overall last year and will be incredibly quick over the familiar route of stages. Past winner Wesley Patterson will also be a strong contender, as will the legendary Phil Collins who makes the trip from Herefordshire to the stages he loves so well and where he has enjoyed considerable success over the past 32 years. Other top entries include Jack Newman, Enda O’Brien, Eugene Megan, Ross Marshall.

The battle for the John Mullane Cup for the highest placed driver from Co Kerry will be as closely contested as it has been since the award was first introduced in the very early days of the Rally of the Lakes. One can never rule out the father and son combination of Charlie and Johnny Hickey whose experience of these stages is vast, as indeed is that of John Hickey, Ed Murphy, Kenny O’Neill and Vincent O’Shea.

The Return of Kevin O’Donoghue to the stages should be a massive attraction as he launches his new BMW M3. This State of the Art project has been under way the past 2 years and is sure to impress with its modern specification and components such as a Swedish built Volvo 2.7 Engine fitted.