The Irish Sun today (Mark May) publishes an article relying on Used Car History Check expert Cartell’s statistics displaying the percentage of imports in the Irish Fleet (Private/Hackney/Taxi) since 2000. The figures show a significant increase in the prominence of imports in the fleet over the 12-year period. While the 2009 figure is particularly high this was due to the large fall in new car sales of indigenous Irish vehicles resulting in the number of imports achieving a higher percentage of the fleet that year. Still, it stands to reason that a person in the market for a 2009 vehicle should be aware that they stand nearly a 30% chance that the vehicle they wish to purchase has a “hidden” history from the UK or Northern Ireland.

The figures from 2011 show a trend in the market consistent with 2010 – imports are around 30% of the fleet total. Overall the figures show that a person in the market to buy a car up to five years old has between a 1 in 4 and 1 in 5 chance of buying a vehicle with a hidden history. And those in the market for a 3-year-old car, or newer, will have approximately a 1 in 3 chance of hitting an import. Through various research drives Cartell has consistently highlighted the problems with imported vehicles: as many as 30% of imports have finance outstanding, or were previously written off, or have been clocked. Remember also that a “hidden history” reveals previous owners which the purchaser may not have been aware of – leading to increased risk of incurring mechanical problems resulting from different driving styles and vehicles that are not well serviced and maintained. Always check the history of a used car before you purchase it.

The chart published today by Cartell runs as follows: 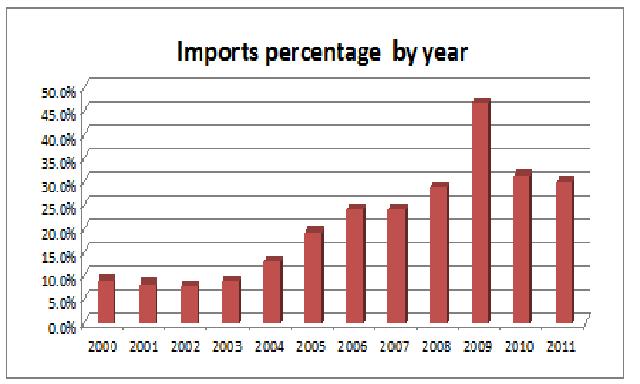 0 thoughts on “News: Percentage of Imports in Irish Fleet by Year”