Home / News & Press / Car Spoiler: How They Work and Does Your Car need one?

The Aerodynamics of a Spoiler

What is a spoiler for a car? A  car spoiler is a wing or aerofoil attached to the back of the vehicle which causes downforce, or increases drag, depending on the speed the vehicle is travelling. In the case of an airplane, the wing pushes the plane up or creates lift by using Bernouilis principle. When a stream of air hits an aerofoil it is split in two. However both streams want to meet again and do so at the trailing edge of the wing. Due to the shape of the aerofoil, one stream has to travel further than the other. But because they are travelling in a steady stream, they meet at the same time. Therefore the stream of air which has to travel the furthest, speeds up and by doing so reduces the air pressure on that surface. The stream beneath has a higher static pressure and this pressure difference between top and bottom creates lift or downforce. So for an aircraft, the stream of air traversing the top surface of the aerofoil covers the greater distance and for a spoiler this is reversed. 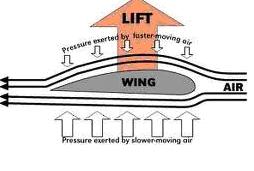 In terms of materials spoilers are usually made of ABS Plastic or Fiberglass, the latter being lighter and stronger and therefore the preferred choice. However, generally speaking, spoilers are of little actual value unless the car is at a racetrack. Compressibility effects which increase the usefullness of the spoiler only come into play above 100 kph and this is why even light aircraft do not take off below this speed even with all of their wing surface area. Most of the time we drive below these speeds. On the road – usually – they are cosmetic and of little real value unless you live in Germany and drive the Autobahns. That being said, car manufacturers are increasingly adding spoilers as standard in a bid to assist in keeping CO2 emissions lower.

The Ford Mondeo Econetic, for instance, includes an Aerodynamically optimised sports suspension, air deflectors, and rear spoiler (five-door only)  to help bring that vehicle into Category B with emissions of 139g/km.