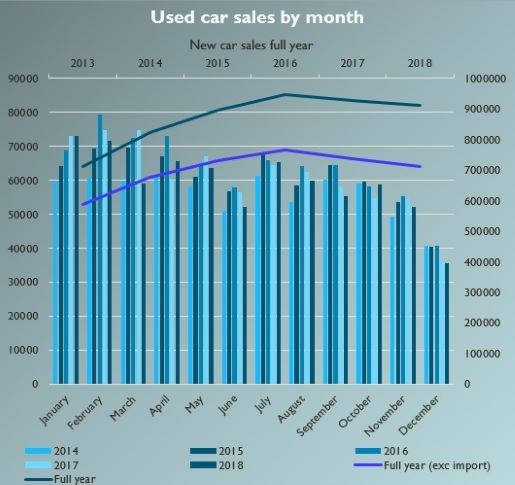 Vehicle history and data expert Cartell.ie announce today (April 3rd) on the findings from the latest state of the market report in conjunction with auto consultants BAC. Used car sales for the first two months of 2019 are 6,765 units down – a decline of 3.8%. However, used imports rose 4.6% in 2018 and this may have weighed on used car sales.

Some of this is due to the WLTP impacts which saw a lot of new cars registered in the run up to September which were then sold as used vehicles the following month resulting in used car sales rising 8.8% in October 2018 over the same period the previous year.

Total used car imports hit 21.9% of all used car sales last year up from 20.6% the previous year. 2019 has seen that market share follow the trend seen in new and nearly new imports with January and February 2019 imports accounting for just 20.8% of used car sales.

The Bank of England’s decision to increase the base rate to 0.75% in August 2018 has had a little downward impact on sterling although not as much as many had anticipated and whilst the prospect of a no deal Brexit looms there is unlikely to be much which will see sterling rally against the euro in the immediate future.

In total terms used car sales for the first two months of 2019 are 6,765 units down which is a total fall of 3.8%. With 2016 seeing a peak of 945,000 used cars sold which has declined by 1.8% for each of the two successive years there is little to inspire confidence that anything but a continuation of that decline with used car sales expect to be down around 3.5% for the full year.

The report was written in conjunction with auto consultants BAC.