Vehicle history expert CARTELL.IE report today (April 17) that in Q1 2015 there have been 75,655 new vehicles sold. The number includes all new vehicles registered in the State in 2015 and includes private, hackney, taxi as well as light and heavy commercial vehicles and all other classes of vehicle. The figure represents a strong 32% increase over Q1 2014. The equivalent number for 2014 was 57,268. 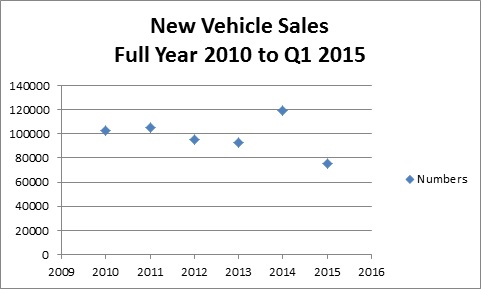 Vehicle history expert Cartell.ie also report today that in Q1 2015 there have been 303,750 used vehicle transactions (including imports) representing an 11% increase in activity in this market. The equivalent figure for Q1 2014 was 273,034. These figures include all used vehicle transactions including trade-to-trade, private-to-private, private-to-trade, and trade-to-private.  Cartell has been tracking used vehicle statistics steadily since 2010 to ensure accurate snapshots of year-over-year market milestones.