Autotrade report on figures produced by SIMI (Society of the Irish Motor Industry) which show that so far this year, new car sales are up by 28 per cent. The confidence evident in January has continued into February with a 21 per cent increase in car sales.

At the end of last year, there was a clear indication of recovery in the sector when the jobs figures from the CSO showed 1,000 more people working in the Motor Industry now compared to the middle of 2013. “This trend is continuing and developing further over the last two months,” according to industry recruitment specialist, RecruitAuto.ie.

Alan Nolan, SIMI Director General also confirmed this saying: “As a result, employment in the sector has also been stabilising and February saw the formation of 37 new companies in the Motor Industry in February.”

Meanwhile, figures in the Insolvency Journal show the national trend for company insolvencies over the past three years, shows a considerable drop last year compared to the previous two years. Strangely, in the auto industry there was an increase last year on the 2012 figure, which had fallen dramatically over the 2011. However, the general feeling is that insolvencies among auto industry will drop further this year, and those that will happen may largely be due to outside factors such as property dealings by the principles. 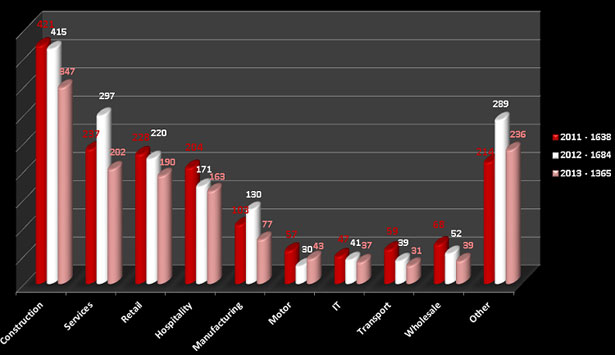