FIA entrants will lead Cartell.ie Rally of the Lakes

Rally weekend is upon us! Crews registered for the FIA European Historic Rally Championship will lead the field away from the start of the Cartell.ie International Rally of the Lakes on Saturday May 4th.

The Rally of the Lakes is the fourth round of the European Historic Championship and, in addition to Irish and UK based competitors, the event has attracted crews from Sweden, Italy and from the USA.

Speaking at the launch of the rally in the Brehon Hotel on Sunday evening Clerk of the Course Dermot Healy said that developing the Historic element of the rally for cars which comply with Appendix K of the FIA regulations has long been an ambition for Killarney and District Motor Club who view this branch of the sports as an area of huge potential growth.

He went on to say that he would like to see other Irish Motor Clubs include classes in their events for these Appendix K Cars since the availability of such classes on other events would encourage more drivers to bring their cars into line with the Appendix K specifications. He recalled that it was the Rally of the Lakes which first introduced the concept of Junior Rallying to the Irish scene and when other clubs followed the Killarney lead, Junior Rallying became an instant success and an important element of virtually every other rally in the country leading to a well supported  Irish Junior Rally Championship.

He believes that the same success could follow in relation to Appendix K Cars.

Double Lakes winner Darragh Riordan will seek to make it three wins in a row, the first person to do so since Bertie Fisher, while former the reigning Tarmac Champion Darren Gass will be anxious to gather maximum Tarmac points following a non finish in the first round in Galway.

Tarmac Championship leader and Galway winner Keith Cronin has opted to miss the Lakes so that his ex Thomas Fitzmaurice Subaru can be driven by his uncle, Denis Cronin, himself a former Lakes winner. 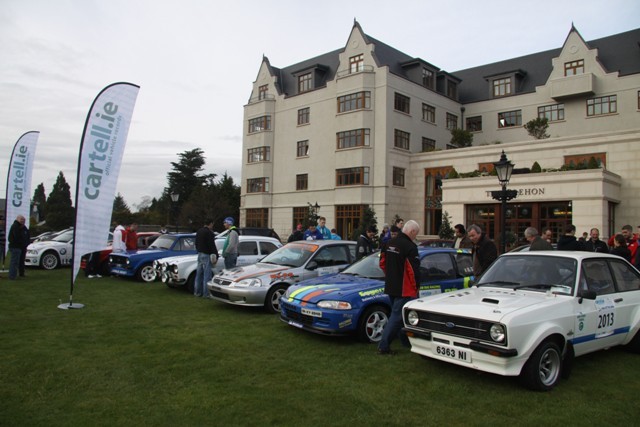 Others who have to be considered as potential winners are Gary Jennings and another former Lakes winner Derek McGarrity, currently lying fourth in the Tarmac series, while Thomas Fitzmaurice, who just missed out to Brian O’Mahony in a year long battle for the 2012 National Rally Championship title will have the machinery and the local knowledge to make life difficult for all the top seeds.

Local driver Alan Ring heads the Group N category in the Tarmac Championship on 22.5 points from Galway but the Moffett brothers, Sam,third on 15 points and Josh whose 18 points from Galway leaves him second in the title race, will not be far off the pace, even in the relatively unfamiliar Killarney territory, so that the Munster Joinery sponsored crew cannot afford to relax at any stage throughout the weekend

After much speculation it has been confirmed that Craig Breen and Paul Nagle will compete in the National Section of the rally using James Coleman’s Mk 2 Escort.

Craig and Paul compete this weekend in the Azores Rally, a round of the European Rally Championship in which they currently hold second place.

The combination of speed and local knowledge should make them likely contenders for the top spot in the National event but they will have to contend with a whole host of others, including some local crews, who all have much more powerful Escorts.

These include National Tarmac Leader Fergus O’Meara, Kevin O’Donoghue and Charlie Hickey who expressed himself well pleased with the power of his new Mk 2 which he launched on the recent Circuit of Kerry.

A good entry of non FIA Historic cars will compete for Tarmac Championship points over the entire rally route and will be seeded in the main field based on their times and results to date.

The top four in the championship all resume battle in Killarney with James O’Mahony’s Volvo holding a 5 point lead over the Mini of Galway’s Ray Cunningham .

The dark horse in this category has to be Mark Falvey, who will have significant home advantage on his local stages on Saturday in the immaculately prepared replica of Billy Coleman’s Mk 1 Escort 00096M.

Juniors join the rally on the second day and will compete over all the stages on that day.

The Lakes is also a counting round of the Southern 4 Championship where Daragh  O’Riordan and JJ Fleming share the lead, but the withdrawal of the Galway driver, who has sold his car, leaves the way open for O’Riordan to advance to a commanding lead in the series.

Saturday’s stages start with Molls Gap, followed by Service in Liebherrs Container Cranes factory at Fossa, before the cars tackle a loop of three stages at Gortnagane, Banard and Knockacullig.

Following a further service break in Liebherrs these three stages are used again before the cars return to Killarney at the end of the first leg of the rally.

Day two begins with Stage 8 at Molls Gap followed by a loop of three classic stages at Healy Pass, Cods Head and Ardgroom , which are each run twice, with service on Dinis Island  in Castletownbere.

The final stage of the event is at Killmackillogue, the fourth of the quartet of great classic stages in the Beara Peninsula.