First, Happy New Year to all our customers and readers. We hope – despite the difficult trading conditions – you have a prosperous 2011 and every success. Last year we considered the issue of average mileage in Ireland using figures from our sister-site the NMR and found that average mileage in Ireland was 10,827 miles per year per vehicle. This corroborated the finding of  Sustainable Energy Ireland (SEI) who were the first to reliably report average mileage statistics back in 2006. SEI also provided averages for diesel and petrol cars: 14,799 for diesel and 9,923 for petrol. But remember those were 2006 figures. We wanted to verify that data against our own store of readings.

Bearing in mind that there was a view in the office that the figure for diesel may well fall – diesel cars are much more affordable today than they were pre-2006 coupled with the advantages afforded by lower taxation and higher fuel economy – we wanted to find the current average mileage figure for petrol and diesel aspirated engines: but particularly diesel.  The results are represented on the chart below. You can find more relevant statistics on the NMR site. 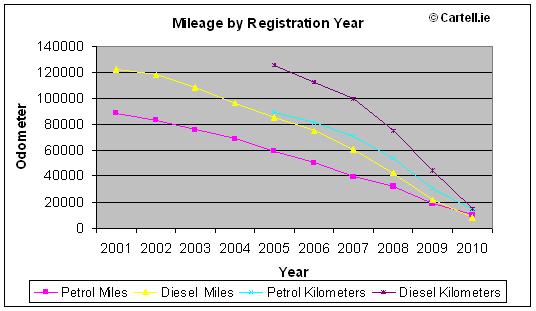 Extrapolating* in a similar manner to the previous article we come up with an average figure of 10,232 miles for petrol cars and 13,610 miles per year for diesel cars. The figure for petrol cars compares with the SEI figure of 9,923, but our figure of 13,610 miles per year for diesel cars contrasts sharply with the finding from 2006. Why is this the case? Well, looking at the figures in a little more detail, we discovered that the big drop in diesel mileage occurred after 2008. In fact, before 2008 the average for diesel engines – based on our data – is 14,213 which is much more consistent with the SEI figure. The drop takes place after 2008 and this is likely because of the introduction of the new motor taxation regime for vehicles with lower fuel economy. In 2008 it became cheaper to own a diesel car too – prices started to fall dramatically – and remember that diesel engines have, generally speaking, better MPGs. The upshot is that diesel aspirated cars became more popular in the mainstream and not just among company reps clocking higher mileage. Inevitably this reduced the overall average mileage reading for diesels and this is reflected in our results. So, 13,610 is the new annual average figure for diesel in Ireland.

0 thoughts on “Average Annual Mileage: Drop in figures for Diesels”