Vehicle History Expert Cartell.ie considered some data from the Used Vehicle Market (excluding imports) relating to May 2015 to produce a market snapshot. Here are some of the results:

Comparing the May 2015 year-to-date position with the equivalent position for May 2014 shows the domestic Used Vehicle Market is up 10.33% year-on-year. The overall number of transactions recorded were less in May 2015 than April 2015 consistent with a cyclical market from January through June. The decline was more or less consistent with the decline recorded between April 2014 and May 2014.

Comparing Used Vehicle Transactions (domestic only) for all makes and models in May 2015 and comparing those to April 2015 (taking account of all trade-to-trade, private-to-trade, trade-to-private, and private-to-private transactions) shows short-term movement in model popularity. The top of the list remains the same through the two months: 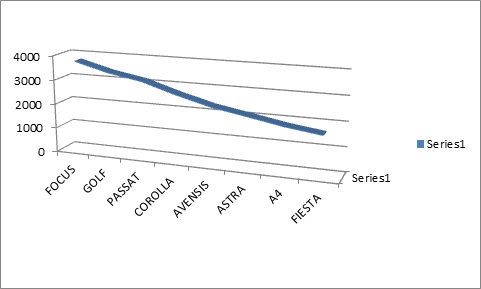 Further down the list the only model which increased in popularity off higher transactions was the Ford Transit (9th most popular model in May). The increase in volume was marginal (+0.9%) but it was still interesting as volumes for all other popular models declined with the market through the period considered – the Ford Focus for example declined 8.2%. Models which proved more popular with the consumer in May than April (viewed against other models in the market) were the Nissan Micra and VW Polo but both returned lower numbers of transactions.

Comparing the year-on-year results for May 2015 with May 2014 the VW Passat (+4.25%) replaced the Toyota Corolla (-2.83%) as the third most popular model overall and transactional volumes for the Passat are up with the general trend in the market. The Corolla on the other hand was the only one of the top-10 models to record less transactions when May 2015 was compared to May 2014.  The trend was generally up: the Focus (+4.25%), the Golf (+5.15%) and the Avensis (+7.68) were among the gainers. The largest upward increase among the top models was recorded by the Audi A4 which gained a strong 15.26%. The largest mover downward in terms of overall model popularity against the market was the VW Polo (-2.45%) which dropped from 9th most popular model in May 2014 to 13th position in May 2015 – up from 15th position in April 2015.

The increase in popularity of the Transit off higher volumes between April and May 2015 may be a further sign of economic recovery in the business sector as companies look to replenish stock. The Transit is up 7.06% year-on-year based on this snapshot of the market.